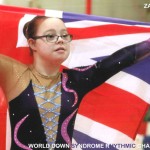 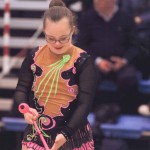 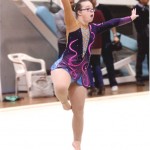 Both Zara and Tracey travelled with a team of 12 British gymnasts, their personal coaches and parents who accompanied the team.

For Zara the reality of other disciplines working at the same time could have been a distraction but she remained extremely focused and able to retain concentration during the 6 event to perform her four routines and also gained three individual gold and one silver apparatus medal.

The competition was attended by countries as far as USA, Mexico, Russia and South Africa who all had very strong support for their gymnasts many of whom attended Gymnastics Schools full time and were fully funded. City of Birmingham and Great Britain Coach Tracy Bedwell was delighted with Zara’s results and said that, “ Zara is very new to the sport compared to the majority of competitors who have been on the international competition circuit for over 15 years; I am so very pleased with Zara’s performances and proud to call myself her coach.’’

Zara’s final honour at the championships was to perform in the Closing Gala that evening with Olympic 2012 competitors, Rhythmic World Group Champions main stream and Italian national team members.