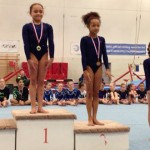 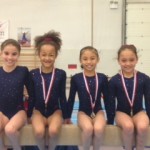 An excellent weekend of competition for the City of Birmingham Gymnastics Club compulsory girls making a clean sweep of the medals in the West Midlands Compulsory 4 Championships 2014. The event was held at the GMAC, Birmingham over the weekend of 22nd and 23rd March.

The competition fielded 11 gymnasts from four clubs all of whom were contesting for six of the selection places in the West Midlands team that will representing at the nationals finals. Finals are to be held on the weekend 3/4 May at Cocks Moors Woods Leisure centre in Birmingham. Four of the successful team selectees, and the top four places in the competition were City of Birmingham gymnasts Mille Bourne (4th); Miriam Allen (3rd); Lissie Cabrera (2nd) and Sophia Meadows (1st).