Head Tumbling Coach at City of Birmingham Gymnastics Club, Chris Porter, recently returned from an educational visit to Russia to one of their top clubs; the following is his report which is also supported with YouTube footage entitled ‘Rising Russian Tumbling Star Vadim Afanasiev’ and ‘Tumbling in Stavropol – The Hit Factory’ both of which can be found on our YouTube channel cbgc2011 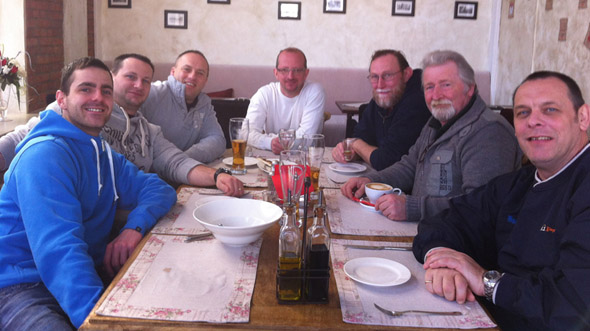 The Stavropol Experience
On the 22th of January 2012, I travelled to Russia with five other GB Tumbling Coaches, Paul Welch, Craig Lowther (National Coach), Alan Lavelle, Ernie Cookson and Ian Matthews. The trip was part of a coach education initiative made possible through the Excel Coaching Programme. The programme is funded by Sport England and aims to develop and support talented and aspiring coaches in the maintenance and achievement of high performance and world class standards in GB coaching.

Head of Delegation & National Coach, Craig Lowther, organised the group; meeting us all at Heathrow airport we to Moscow and onwards to Krasnodar a total of 7hrs and 20mins. A four hour mini bus drive later brought us to our destination, Stavropol. The first thing we noticed during our flight change was the freezing weather. The temperature dropped to minus 26 ⁰. We stayed in a hotel 15 minute’s away from the gym it was very basic but did its job; the staff were very welcoming and looked after us well.

That evening we visited the home of our hosts, the Skakoun family, owners of one of the most decorated Tumbling clubs in the world. Historically, the club dates back around 30 years with founder, Vasily Skakoun, former world champion. Now in his late 60’s Vasily still has a very active role within the club along with wife, daughter and son, Vadim (former BG National Tumbling Coach). In the ‘80s Vasily invented what became known as the ‘Ski Track’ as it was literally constructed from Nordic type skis placed in close proximity and covered with an appropriate surface matting. This was a revolution in the development of the sport of Tumbling; improved elasticity of the track led to improved technical performance and an increases in routine difficulty. Since then Skakoun tracks have been at the forefront of the development of tumble tracks with carbon-fibre rod tracks now being used in place of the skis.
Our first day of activity involved a tour of the converted garages, next to the gym, in which manufacture and design of the tumble tracks for world wide distribution took place. It was also the place where vasily invented the twisting belt which we now take for granted and see in gyms world-wide.
The trip to Russia was, for me, amongst other things, a great opportunity to meet up again with Vadim Skakoun. Vadim was my coach for the last 2 years of my tumbling career with whom I spent many grueling hours of training at Lilleshall National Sports Centre. His ten years of tenure as national Tumbling coach played a great part in GB’s 2003 historic victory in Hanover, Germany where both the men’s and women’s teams took world titles. Shortly after this period he returned to his home country where he was part of the Russian Artistic gymnastics set up and also went to the Beijing Olympics in 2008. He has since returned to his tumbling roots and is now back in the gym at Stavropol working along side his sister and mother and father with some very talented tumblers.
The Trip Objectives were:
1. Watch and record the techniques of the tumblers.
2. Watch and record the conditioning of the tumblers.
3. Watch and record the set up and use of support rigs.

The first thing I noticed on entering the gym was the quality of the equipment being used compared to our own at City of Birmingham. There were springs missing in the trampoline and exposed wood where padding should have been; health and safety was not on a par. However this didn’t seem to bother any of the gymnasts or coaches. The gym was set up specifically for one discipline, Tumbling. Three tumble tracks dominated the gym: the blue competition track which ended with a landing area; the soft and springy red track which ended with a slung pit, allowing the tumblers to practice skills that weren’t quite ready for the blue track and alleviating some of the stress placed on the tumblers joints. The third track was set up with a trampoline at the start allowing the gymnasts to practice double somersault transitions and whips into flics etc. All three of tumble tracks and the two trampolines had running rigs above them.

Last year 4 other coaches visited Stavropol and distributed the data that they had recorded. There had been lots of progression with in the gym mainly with the preparation groups and age groups. The prep groups had gone from learning flics and front somersaults to whip flics and back somersaults. One of the age group tumblers in the 15/16 age group was practicing three double somersaults in one run, full in straights and double straight transitions. Also in that age group was Maxim Shilakin, coached by Vadim Skakuon who became World Age Group Champion in the 15/16 age group at the recent World Championships, Birmingham. Unfortunately, we didn’t get to see much of Maxim due to a knee injury. In the 11/12 age group Vadim Afanasiev really stood out for me. His skill level on the trampoline pretty much matched that of the seniors even doing full in triple pikes! during one of the training sessions he attempted whips to triple pike on the red track! definitely one to watch out for in the future.

The Seniors didn’t disappoint either with five members who had represented Russia at the recent World Championships held in Birmingham. They were in the gym preparing for the Russian Championships which were being held on the 4th and 5th of February. Stavropol won both the men’s and women’s titles. They also took 1st 2nd and 3rd in the women’s individual and a 2nd place in the men’s individual. This competition was also one of their selection trials for the upcoming European championships in St Petersburg on the 8th – 16th of April. Not only did we witness world-class tumbling with triple backs and full in triples as standard but also dedication and determination. One of the senior men was carrying an injury to his wrist so unable to use it substituted a round off entry with a barani instead.

Overall the trip was and an excellent experience and a great way of learning and gaining knowledge. The knowledge I gained from being in such an established club not only through watching the Russian coaches but also through the various discussions with our own contingent has inspired me to get back to Birmingham and put into practice certain elements of what I have seen, understood and feel possible to integrate into my environment.