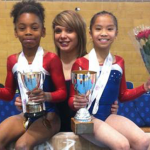 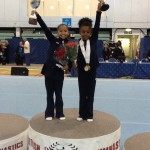 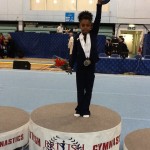 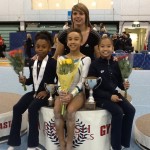 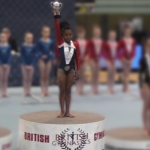 Huge congratulations go to Taeja who had an excellent competition at the Womens Artistic Gymnastics National finals held on Saturday 3rd November at the Guildford Spectrum at which she took the championship title in the British Voluntary Level 3 competition.

Taeja achieved an overall score of 50.30pts comprising of 12.80pts(Vault); 12.55pts(Bars); 12.30pts(Beam); 12.65pts(Floor). A fall on beam did not hinder her journey to gold or her outstanding apparatus performances. Also, to Christine who finished in =5th place in the same event with a score of 49.025pts. Both girls were also part of the L2 team which represented the West Midlands at these national finals and the success continued when the team took overall gold medal place.

The afternoon event saw Rachel competing in the British Level 2 Voluntary Championships in which she gained 6th place in the combined overall event, a creditable close to her national competition season.