GB squad & City of Birmingham GC gymnast Raekwon Baptiste has started off his competition year well by doing a double and taking the British and English Championship titles over consecutive weekends. The Glasgow Artistic World Cup event took place at the Emirates Arena, 10th-13th March alongside which also ran the U.14 British Mens championships at which Raekwon’s winning score of 75.450 placed him 3.5pts ahead of his club-mate Korben Fellows followed by another club-mate Thomas Paradise in third place; an overall medals sweep for City of Birmingham Gymnastics Club. Well done also to Tobie Watson who finished in 8th place with some creditable performances on rings and vault.

Success continued for City of Birmingham GC at the English Championships which were held at Loughborough University on Sunday 20th March, where Raekwon took the U.14 all-around tile with a score of 76.034, bettering his British Championship performance. He was joined on the podium by club-mate Korben Fellows who took the bronze medal position with a score of 73.801pts. Also in the competition was city of Birmingham’s Tobie Watson who finished in overall 5th place and Tom Paradise who unfortunately had to be withdrawn after an injury at High bar,

Further success came in the U.18 Championships with Joe Fraser taking the silver Medal and Joshua Nathan Bronze followed by Hamish Carter in 4th place.

In the U.16 championships Donnell Osbourne took all-around Silver Medal position; in the Seniors Dominick Cunningham’s 84.502 score gained him overall silver medal position and also in the Senior Mens (Guest) event, City of Birmingham also had a success with the Championship winning title being awarded to Daniel Corral with a score of 85.802. A great and successful weekend for all of our performers. 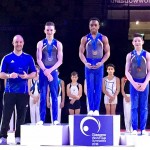 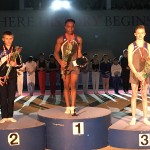 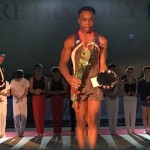 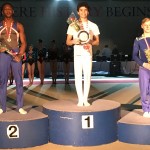 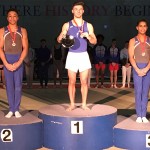