A big congratulations to Lisa Higgins, Rhythmic Head Coach, and Franki Jones, Senior British Champion, for their selection to represent Great Britain. Lisa will be going as Senior Individual coach and will, along with franki, be busy in their build up towards the event when they travel to two international events in France, one of which a Grand Prix event. Well done and good luck in your preparations. 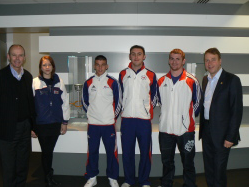 Francesca is also amongst four British Olympic hopefuls that have been awarded Olympic Solidarity Athlete Scholarships by the International Olympic Committee to help them in their ambition to compete for Team GB at the London 2012 Olympic Games. Francesca, Martin Ward (boxing), Stevan Walton (shooting) and Peter Kirkbride (weightlifting) will each receive financial support towards their training and preparation for Olympic participation.

Francesca along with the three other athletes attended a workshop at the British Olympic Association (BOA) Headquarters in London where BOA Chief Executive and Team GB Chef de Mission Andy Hunt and BOA Director of Sport Clive Woodward spoke with them about how to make the most of their Scholarship award and the importance of competing in line with the Olympic Values of Friendship, Excellence and Respect.