GB Gymnastics has yet again soared to heady heights with the gold medal winning performance bounded out from our Team GB Tumbers at the recently held European championships. Great Britain stamped its authority as a force to be reckoned with in the junior and senior ranks of excellence by taking the junior mens and womens as well as the senior mens and womens team gold medal podium places at the Pisuerga Sports Centre, Vallodolid, Spain, 28th March -3rd April.

GB and City of Birmingham Gymnastics Club gymnasts Kallum Mulhall, 15, and Jaydon Paddock, 14, along with Dominic Mensah (Pinewood GC) and William Finn(Wakefield GC) comprised the four member team of GB gold medal winning juniors with a team score of 107,600 followed by RUS 106,900 in silver and DEN 101,700 in bronze medal position. Both Kallum and Jaydon where the top two highest scorers in the team, this meant they also qualified through to the individual championship finals, a further feat of success. Both gymnasts had the performances of their lifetimes presenting newly developed tumbles for the start of this season which bore further fruit and rewarded Kallum with an overall bronze medal and Jaydon a 5th overall place in the finals.

Also travelling as GB team coach was City of Birmingham’s head tumbling coach and former International, Chris Porter who commented: ‘it has been a historic day for British Gymnastics to take all team medals in the mens, women, senior and junior events. I was brought close to tears when I reflected on not only what we had achieved but that Kallum and Jaydon had been a strong part of it all, a really rewarding Euros in so many ways, I’m so proud of the boys’

Kallum and Jaydon’s Championships winning tumbles can be seen on youtube at https://www.youtube.com/watch?v=vwPtYQ44Dk8 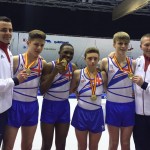 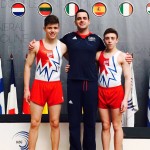 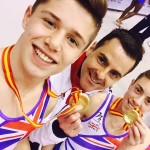 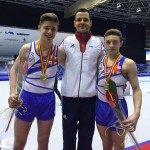 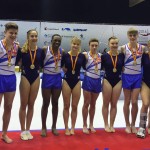 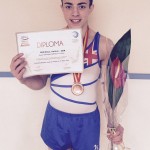 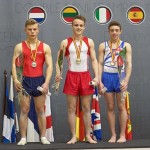 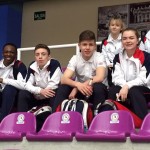 Junior Chilling in the arena 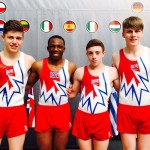 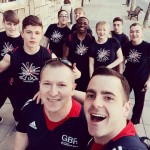 Coaches and Junior on route to the venue 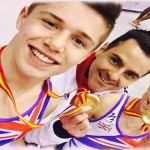 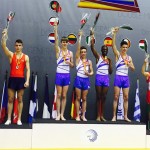