Focused on his road for Commonwealth Games 2022 selection City of Birmingham Mens Artistic gymnast Joe Cemlyn-Jones placed an excellent performance at this weekends Northern European Championships in which he took 1st place position in the all-around championships as well as gold in the individual apparatus events on Floor and Pommel horse along with bronze on Parallel bars.
The event took place this weekend, 13th/14th November at the Sport Wales National Centre, Sophia Gardens. Delegations from Finland, Denmark, Iceland, Ireland, Norway, Scotland, Sweden, the Faroe Islands, the Isle of Man and Jersey and Wales have taken part. This weekend also marks a small milestone in the event’s history as 20 years has been reached since its inauguration in Helsinki, Finland, back in 2001.
Joe represented his Home Nation team, Wales, who also took the team gold medal place at this event; he is also a GB senior team International recently having returned from Japan where he represented GB at the World Championships.
Congratulations and well done to Joe and to Team Wales on their succeesses over the weekend…………. 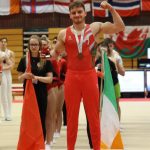 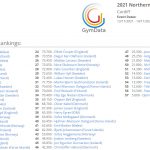