Joe Gets Team Gold & All around Silver in Austria 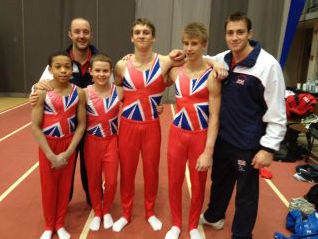 A huge congratulations to the Juinior GB Mens team but especially to Joe, City of Birmingham, who has been in Austria since 24th Nov. and competed today, sat 26th Nov, in the ‘Future Cup’ This is Joe’s first International honour and what an outing it has been; Junior Team GB finished in 1st place to leave behind Austria, Australia, Belgium, France, Germany, Japan, Hungary, Scotland, Slovinia and Sweden. In this profiled gathering of countries Joe gained overall 2nd place, the potential start of a world class competitive career. Accompanying Joe is Lee Woolls, City of Birmingham, who attended as coach and Head of Delegation so an added congratulations to him also.

The team will be making a ‘whistle stop’ training day visit in Arc, France, before returning on tuesday.