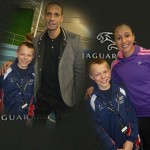 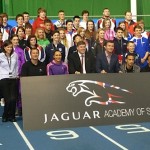 As part of receiving a years sponsorship from Jaguar Hamish, GB & City of Birmingham, attended the Jaguar Academy of Sport celebration event in Sheffield at the English Institute of Sport. This was the first of many inspirational experiences open to Hamish from now on. He was able to meet, talk, and be pictured with ambassadors of sport such as England & Manchester United defender Rio Ferdinand; former world championship gold and silver medallist and 2012 Olympic Hopeful, heptathlete, Jessica Ennis.