As London prepares for its staging of the worlds biggest sporting event, the Olympic Games, gymnasts who had not made the qualification grade in last years World Championships took this final opportunity to demonstrate improvements in their performances and cross the finish line to the awaiting Olympic stage that will be London 2012. 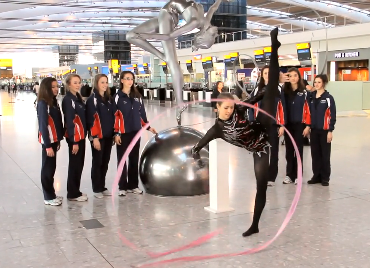 Five times British Rhythmic champion and City of Birmingham gymnast Francesca Jones attended two days of eventing at the 02 Arena in what will be the Olympic gymnastics arena. Her attendance on the 16th and 17th January to trial the venue’s atmosphere and apparatus, and her performance within it, was an invaluable experience. Franki had already made the qualification score but as the only Individual Rhythmic gymnast being put forward from British Gymnastics to represent GB competing at the test event formed part of her preparation towards the final six month of her Olympic journey. It was not one of Franki’s most memorable performances to date but proved invaluable on many levels and highlighted areas of work that need improvement before her big day.

Franki had a much needed inspirational end to her week in London when she was honoured by sculptor Eleanor Cardozo who dedicated a sculpture titled “Ribbon on World” to her along with a plaque which will from now on accompany the sculpture and reads:

“Promise By Eleanor Cardozo – This sculpture is dedicated to Francesca Jones whose youth and talent embody the Olympic spirit and the promise of a generation.”

This was part of an exposition in Heathrow’s Terminal 5 fine Arts Gallery which launched a week long exhibition celebrating the sport of gymnastics.