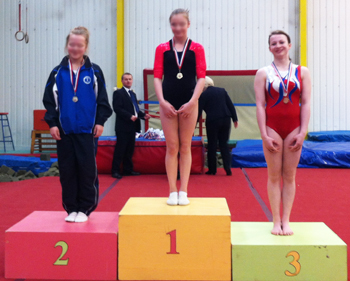 City of Birmingham GC enjoyed huge success at the finals of the National Elite Grade Championships 2012, which were held on 19th May at Fenton Manor Sports Centre.

Qualification for British Championships
Congratulations also go to Kayleigh and Jaydon who both qualified for the British Championships which are to be held at the National Indoor Arena, Birmingham, on the 7th and 8th of July. Both had to score 55.00pts plus to qualify: Kayleigh made her qualification in 3rd place, competing in the southern qualifiers in Andover, with a score of 59.30Pts. Jaydon made his qualification competing in Durham at the Northern qualifiers & finishing in 3rd position with a score of 55.80pts.