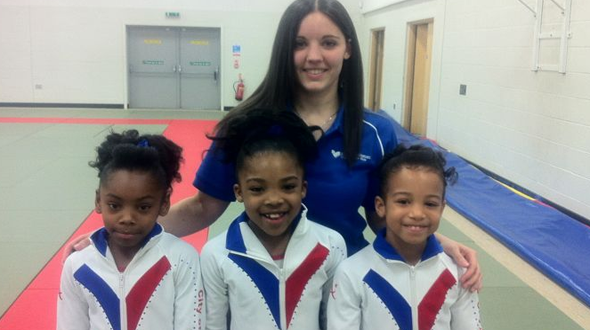 Saturday 4th March at the GMAC, Birmingham, was the stage for the West Midlands Girls Compulsory Levels Championships 2012 in which, Taeja, Karys & Montana, City of Birmingham Gymnastics Club all performed.

Huge congratulations go to Karys, 8yrs, who after a stylish and impressive performance manage to claim the Compulsory Level 5 Gold medallist 2012 title with a score total of 61.75pts. Also competing in the same competition was Montana who finished in 7th place. Well done to both girls who acquitted themselves extremely well in their very first profiled event for the City of Birmingham GC.

Further congratulations go to Taeja who in the Compulsory Level 3 Championships where she, despite a fall on her first piece, beam, performed near perfectly on her remaining apparatus and claimed a very creditable 2nd place with a score of 60.275. This performance also safely secured her a qualification place in the national finals which are to be held on the 21st/22nd April.