Well done to the City of Birmingham Gymnastics Club Rhythmic squad who managed a clean sweep at the recent British Team Championships and Group League Round 3 Championships which were held at Fenton manor, Stoke-on-Trent, 21/22nd November. There were two British championship event titles to be decided across the weekend, the first was the Elite Group League in which we entered three teams as follows:

The second competition was the British Team Championships in which a combination of scores across all of the age groups are collated in order to decide who the 2015 championship club of the year would be. For this competition the City of Birmingham team comprised of Espoires: Daisy Burke, Camone Gorden, Amelie Howard, Alarna Turton along with Fran Barker and all of the above gymnasts who competed in the Elite Group competition. City of Birmingham Gymnastics Club triumphed in this event and took the championships title. 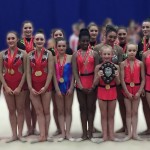 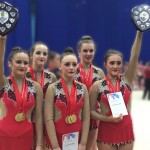 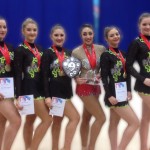 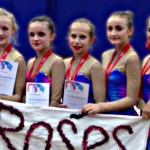 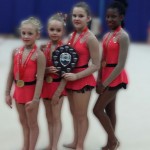