The 2015 Tumbling British Championships took place at the Echo Arena, Liverpool over the weekend of the 12th and 13th of September. Great Britain is described as one of the power houses in World Age Group Tumbling with 6 current Age Group World Champions out of a possible 8, so the competition was fiercely fought with some amazing performances throughout the weekend.

Eight City of Birmingham tumblers in 4 different age groups qualified for the Championships after posting selection scores at 2 Qualification events. The first was held at the Ricoh Arena, Coventry on the 12th April. The second was held on the 14th June at the English Institute of Sport, Sheffield.

In the Mens Elite Level 13-14yrs championship well done to Jaydon Paddock who became British Champion with a score of 33.80, 0.9 ahead of 2nd place; Jaydon’s finals Tumble run consisted of: Round off, 5 whips flick into a double twisting, double straight somersault. Also, successful in the Mens championship was Harrison Oliver-Baynham who took bronze medal position in the Elite 11-12 years competition in his second British Championships.

Well done to our younger team members who competed in the preliminary rounds: Hope Sutherland (9/10yrs) who finished 16th place; In the 11/12yrs – Evan Kemp, 5th; Oliver Dean 4th; Sebastian Oliver Baynham, 10th. This was Hope, Evan, Oliver and Sebastian’s first taste of a major championship. It can be a very daunting experience when all eyes are upon you in such a big arena at such a prestigious event so there were bound to highs and lows throughout the championships.

A special recognition goes out to Jaydon and Kallum who made City of Birmingham History by becoming the clubs first ever British Age Group Champions! 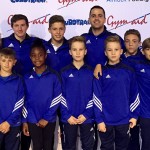 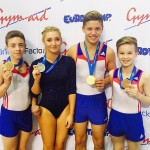