An extremely successful weekend unfolded for the City of Birmingham Gymnastics Club Rhythmic gymnasts at the British Gymnastics Championship Series which also combined the Sports Acro, Aerobics and TeamGym championships all of which took place at the M&S Bank Arena, Liverpool from 25th-28th July.

Congratulations to the consistent performances from Amelie Howard, Olivia Whatmore, Alarna Turton, Jess Dodd, and Daisie Burke which carried them through to take the 2019 senior all-around group championship title.

Well done also must go to the ‘Gems’ Espoir group of Cerys, Aavni, Tasia, Hannah and Ayumi who earned themselves a bronze medal for their Ball routine at their first British Championship appearance. 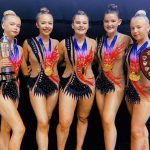 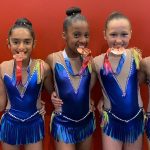