A great day out for the City of Birmingham Gymnastics Club Rhythmic Squads who competed in Round 1 of the National & Elite Group League Championships which were held at Fenton Manor Sports Centre in Stoke on Trent, 3 & 4th June.

Final congratulations go to the senior team of Nicole Allen, Natasha Hodson, Jessica Bateman, Sophie De Bear and Charlotte Farrell who took bronze medal place. It was a special guest appearance from coach, Charlotte Farrell, that kept the team in the competition when one team member fell ill. City of Birmingham Coach, First year mother to baby Jack and former national level competitor Charlotte easily slipped back into her leotard and into competitive mode and assisted the team into third place in this first round of competition. 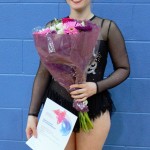 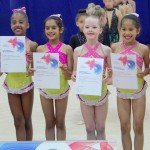 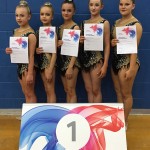 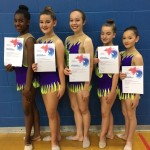 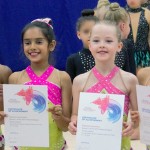